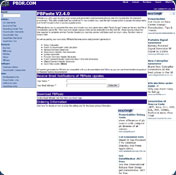 PBDelta is a lightweight tool which facilitates the management and comparison of binary and source files. It was developed as a quick and easy way to highlight any differences between the two versions of your Application, revealing common and uncommon changes made to source files. PBDelta is intended to be used as an internal management tool and to improve the quality of your developed Application.
PBDelta is particularly useful for comparing and merging objects, objects and functions or objects that have been “undeleted” after a bad build.
PBDelta is used as a tool for your own internal development and reports. PBDelta can be used to compare and report on your own library changes or all the changes made to your source files. By comparing and reporting on all of the changes that you are making to your source code you will be able to quickly spot the changes that break your application and will always be better prepared for any errors that may occur.
PBDelta allows you to export a report of the common and uncommon changes made to your source code, together with a listing of the important new changes you may have missed. The list of changes can easily be merged into an existing or new project by hand, but the extensive summary report can also be used with the compare function to analyse the changes for the entire project.
While this tool can compare your compiled source code against your source code it cannot compare your compiled code against a compiled code. PBDelta uses basic file and line level text comparisons as well as checks to identify files that have changed size.
Features:
￭ Use to identify areas of source code that have changed, highlighting any new or updated code.
￭ Provide a means to identify changes made to the source code such as functions, objects, classes, views and controls.
￭ Compare any version of your code to any other version of your code, using a set of parameters to identify the differences.
￭ Calculate the changes made in an Application; use PBDelta to calculate the Common and Uncommon changes made to a set of files.
￭ Produce reports for the changes made; display the common and uncommon changes as a summary report or as individual reports for each file.
￭ Identify commonly used objects that have been altered, or lost.
￭ Generate a report of the changes made to a set of files, which can be used to merge the changes into an existing or new project.
￭ Use as an internal tool

PBDelta provides a straight forward way of locating the differences between two versions of a PB library or object. It’s designed to check all PB version differences quickly and easily. PBDelta can report on all differences between two files, one at a time, comparing the version numbers of all referenced objects (classes, files, libraries, objects and instances) and the most common differences reported are listed in an easy to read tabular format. PBDelta provides detailed information on the differences, it can modify the messages to highlight the changes between files and groups of PB code files, it can identify individual control actions, merge objects, undelete functions and preserve sections of code. The application is simple to use and can handle large versions of PowerBuilder.
PBDelta is free to download and use. It is also available to buy and the package includes a registration key that allows you to register the program. These key packs are available for both platforms; Macintosh and PC. To purchase PBDelta using the online ordering facility please email or fax order@energyanswers.com.
Visit www.energyanswers.com for more info about PowerBuilder

Plotting two series of data on the same figure in Matlab

Now, you can be on your